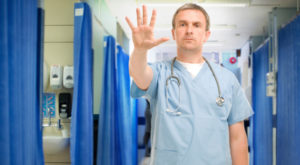 Emergency room doctors in Ohio are crucial for public health and safety. However, every time they go to work, they face an increasing risk of being violently assaulted in the workplace.

Assaults on ER doctors on the rise

A survey conducted by the American College of Emergency Physicians showed that assaults on ER doctors are on the rise. More than 3,500 ER doctors across the United States were polled in August 2018. The survey found:

Another survey published in the Annals of Emergency Medicine examined ER doctors in Michigan. The survey found that:

According to the Michigan survey's co-author, Dr. Terry Kowalenko, ER doctors are at risk of experiencing violence because, "Patients coming to the ER are generally in a vulnerable and volatile state." Dr. Kowalenko continues, "They're often on drugs or the victims of gang or domestic violence or need to be in a psychiatric facility."

What can be done to protect ER doctors?

In order to mitigate the risk of being assaulted on the job, ER doctors are calling for change. This includes state laws that make assaults on health care employees a felony as well as increased use of metal detectors in hospitals.

According to Ohio state code (§ 2903.13), assault on a health care professional, at minimum, is a misdemeanor in the first degree that carries a fine of up to $5,000. If an offender has previously been charged with assaulting a health care professional, he or she can be charged with a felony of the fifth degree in certain circumstances. While those criminal charges are important to hold offenders responsible, it's also important for medical professionals to get the treatment and wage loss benefits they need after an injury. That's where workers' compensation comes in.

If you have sustained an injury after being assaulted on the job, your injury may require treatment and time away from work. You may be frustrated and worried about the financial burden. An experienced attorney at Hochman & Plunkett Co., L.P.A. can help guide you through the process. Contact us today and find out what we can do for you.