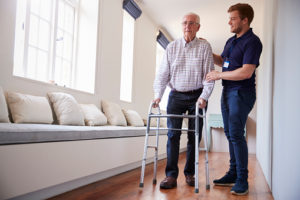 It's no secret that nursing homes and assisted living facilities are physically demanding places to work. From back injuries caused by lifting patients to slipping and falling on a wet floor, these workers face occupational hazards unique to their profession that can potentially lead to long-term, debilitating injuries.

According to ABC 5 in Cleveland, the state's $1 billion spent on workers' compensation claims are represented, in large part, by those injured while working at nursing homes and other personal care facilities.

As a result of these startling statistics, ABC 5 reported that Cleveland State University Health Science researchers received a quarter-million dollar grant from the Ohio Bureau of Workers' Compensation to work with Northeast Ohio nursing home employees on accident and injury prevention.

Researchers told ABC 5 that their primary focus centered around every day movements made by employees. Using video game technology, the namely the Xbox Kinect video camera, researchers installed the technology in patient rooms and began by watching workers go about their day.

From there, ABC 5 reported that researchers were notified of incorrect movements by way of monitors attached to nursing home employees, providing feedback to workers to help reinforce safe movement techniques.

Nursing homes and assisted living facilities are considered more dangerous than other industries for a number of reasons. Not only are nurses and nurses' aides on their feet for long hours, but due to frequent contact with patients, co-workers and equipment, they are also exposed to hazardous situations every day.

The following represent some of the most common accidents sustained by personal care facility workers:

With workers at risk of sprains, strains, broken bones and other serious injuries, it's critical that nursing home facility employees, and employers alike, take every step necessary to prevent injuries. A failure to do so could result in a workplace injury or a complex claim requiring legal assistance from an experienced attorney.