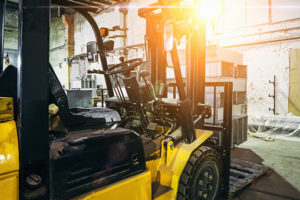 In 2017, roughly 270,000 injuries were reported in the transportation and warehousing industry, according to injury facts released by the National Safety Council (NSC). Approximately 819 fatalities were reported within the same industry that year, following just behind the construction industry. The number of deaths reportedly grew by 5.3 percent from 2016-2017.

More than a quarter of all industrial accidents occur at loading docks, and there are roughly 600 near misses for every accident.

Forklift fall-throughs, the most common and deadly dock accident

According to an article in EHS Today, forklift fall-throughs are regarded as one of the most dangerous loading dock accidents. It occurs when while a trailer is being loaded or unloaded and is caused when the momentum of a forklift pushes a trailer away from the dock, causing the forklift to fall through.

This can also occur when a truck driver prematurely pulls away from the dock while the forklift is still loading items. Some forklift drivers are able to escape. For those who don't, a forklift fall-through can be fatal, since the average forklift can weigh as much as three cars.

Solutions to the problem

Warehouses and distribution centers should first understand that wheel chocks used on trailers may not be effective when it comes to dock safety. Ensuring that every trailer is chocked is not only difficult to do, it's rarely ever done correctly.

What's worse, wet and icy conditions can render wheel chocks ineffective. Wheel chocks will also not stop a truck driver from prematurely pulling away from a dock.

In addition, many warehouses and distribution centers either don't use wheel chocks, don't have them, or have wheel chocks that are worn out. Rather than rely on wheel chocks, the EHS Today article suggests using vehicle restraints.

Weighing the cost with the risks

According to the ESH Today article, the average workplace accident that results in an injury costs employers $189,000. This money would be better spent investing in a vehicle restraint system, which could greatly reduce dock accidents and save employers more money in the long run.

Some distribution centers and warehouse employers fail to make this investment simply because they believe it's too expensive. As a result, forklift operators and other dock workers face the risk of sustaining severe and life-threatening injuries.

That's why it's best to consult with an experienced Ohio attorney who knows how the process works and how to best maximize your chances of receiving benefits. Contact us online today to get started.