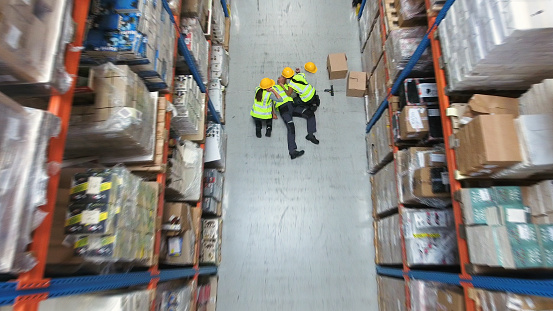 A recent fatal Amazon warehouse accident that killed six workers has renewed questions about the company’s safety policies and procedures nationwide, according to CNBC, one of many news organizations that reported the tragic workplace accident.

The warehouse collapse occurred at an Amazon distribution facility on a recent Friday night in Edwardsville, Illinois. Severe storms and strong tornados were forecasted for the area. As a result, several Amazon drivers sought refuge at the warehouse, known as DL14.

Minutes later, an EF-3 tornado with wind speeds of 150 mph tore through the warehouse. The high-powered tornado caused the 1.1 million-square-foot warehouse to collapse, killing six Amazon workers inside the building.

In response, the Occupational Safety and Health Administration (OSHA) has launched an investigation to determine why the warehouse collapsed. Local and state officials also initiated additional accidents investigations. According to Illinois Gov. J.B. Pritzker, the state wants “to make sure all of the code was followed in the building and to find out exactly what occurred,” CNBC reported.

In addition, lawmakers sent a letter to Amazon seeking additional information about how the warehouse accident happened and whether the company’s “anti-worker policies that prioritize profits over worker safety” contributed to the fatal warehouse accident, CNBC reported.

Many Amazon workers who wear Amazon uniforms and drive vehicles bearing the Amazon logo technically do not work for the company. Instead, they work for third-party delivery companies contracted by Amazon to do such work.

This working arrangement has sparked criticism of lax safety protocols at Amazon, CNBC reported. Amazon drivers must inspect their vehicles at the start and end of each shift. However, Amazon drivers have reportedly been told to forego such daily vehicle safety inspections and not report mechanical problems with such vehicles, according to CNBC.

How common are warehouse accidents?

Between 2017 and 2020, there were near twice as many “serious incidents” that resulted in injuries in Amazon warehouses compared to non-Amazon warehouses during the same four-year time span.

Amazon employs more than 1.3 million workers worldwide and has 5,411 Amazon facilities in the United States.

Why do warehouse accidents happen?

Warehouse accidents often occur because of the negligent or reckless actions of employers or co-workers. This includes:

Warehouse accidents happen for many other reasons. Whatever the cause of your accident, make sure you have an attorney conduct an in-depth investigation to determine exactly what happened.

How can a lawyer help?

Warehouse injury claims often turn out to be complicated legal cases. Don’t simply assume you will be fairly compensated just because OSHA or another government agency is investigating your accident.

Such investigations only focus on determining what happened and if safety violations occurred. If so, such agencies will take action against the company and perhaps issue fines or other penalties. However, they are not concerned with whether you receive financial compensation for your injury-related expenses.

This is why you need a dedicated legal team on your side. Our Ohio warehouse accident attorneys at Hochman & Plunkett Co., L.P.A can fight for your rights every step of the way. We have years of experience handling such complex legal cases in Ohio. As a result, we’re familiar with the rules and regulations that apply to warehouse accidents.

Learn more about how we can help you. Contact us and schedule a free case consultation with an Ohio warehouse accident lawyer who gets results. We have offices in Dayton, Cincinnati, Springfield, and Troy and handle claims throughout Ohio.