Home » Blog » Falls on Construction Sites Can Cause Serious Injuries

Falls on Construction Sites Can Cause Serious Injuries 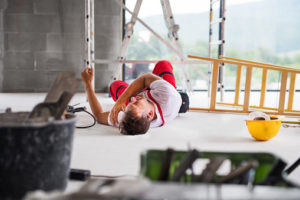 The building boom is everywhere. Construction sites mean jobs. More than 6.5 million Americans, including plumbers, roofers, carpenters, electricians, and demolition laborers, are in the building trades.

And while the jobs are there, so is the danger. Enormous tools can fall from upper floors, bare wires can carry deadly electric charges, trenches can collapse while workers are working in them, and scaffolds can wobble.

Where the danger exists

The most common way workers die on the job is from falls, according to the Occupational Safety and Health Administration (OSHA). Additionally, OSHA urges those who work in the construction field to plan ahead and make sure that projects are well coordinated. Employers should also make sure that workers are provided with the right equipment and safeguards and that they have received adequate training.

By nearly every measure, construction work is safer today than it was in the 1960s and 1970s. However, serious dangers remain. The most recent findings from the Bureau of Labor Statistics show that 937 construction workers were killed in 2015. Forty-two percent of the fatalities involved falls. A third of the falls were from more than 30 feet. Twenty percent occurred in the victim's first two months on the job.

Construction site accidents can cause serious injuries, including but not limited to:

Why employers should be held accountable

OSHA considers workers who are six feet or more above ground-floor level at risk for serious injury or death. Under OSHA regulations, employers are required to provide training and  appropriate safety equipment including stair railings, handrails, safety nets, harnesses and lines.

According to a New York Times investigation, operators of most construction sites where workers have died failed to take basic steps to prevent falls. Workers frequently did not wear harnesses or helmets as required by law. Supervision was often lacking. In many of the projects, a premium was placed on speed, causing workers to take dangerous shortcuts. According to OSHA officials in Ohio, lack of adequate safety training and young and inexperienced workers were the two primary reasons for fatal construction accidents in 2016.

In the event of an injury caused by a work-related fall, you should seek the legal advocacy of an experienced Ohio workers' compensation attorney. Hochman & Plunkett Co., L.P.A. will fight for you every step of the way. Contact us today and find out how we can help you.