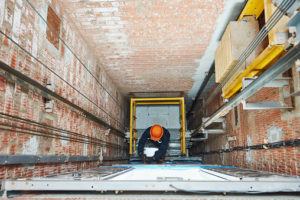 Elevators provide an essential way to navigate large buildings. In order to remain safe to use, they must be properly built and maintained, however. For many workers, constructing, servicing, and repairing elevators is a dangerous job.

According to a Quarterly Data Report by the Center for Construction Research and Training (CPWR), elevator-related construction deaths fluctuated each year from 2003-2016 but showed an overall increase in fatalities. There were 14 deaths in 2003 and 28 in 2016, but 2015 saw the highest number of deaths during that period at 37.

Between 2011-2016, there were approximately 286 elevator-related fatalities across all industries, with 145 occurring in construction. Falls to lower levels were the most prevalent causes of death, accounting for more than 50 percent of all fatalities. Among falls:

Elevator installers and repairers were the most susceptible to fatal accidents - with a total of 19 deaths and a rate of 14.9 fatalities per 100,000 full-time employees.

While elevator-related construction deaths have increased from 2003-2016, nonfatal injuries have declined. In 2003, approximately 380 workers sustained nonfatal injuries. In 2016, that number was 280. The number of nonfatal injuries spiked to 920 in 2012, the highest during the entire 14-year period.

From 2011, the construction industry saw a total of 2,410 nonfatal injuries due to elevator accidents. Most of these injuries were caused by caught in/between accidents with objects and equipment (25.3 percent).

Other accidents that resulted in nonfatal injuries included:

The most common nonfatal injuries included:

Roughly 46 percent of elevator-related nonfatal injuries required 31 or more days away from work to recover. Spending time away from work and accrued medical costs can be financially overwhelming for injured workers.

That's why it's important to take immediate action after a construction accident. Contact an experienced workers' compensation attorney at Hochman & Plunkett Co., L.P.A. today to get started.