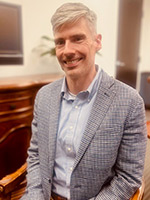 Shaun Omen was born and raised in Columbus, Ohio and is a graduate of Ohio State University, with degrees in Political Science and Mandarin Chinese, and Capital University Law School.

Professionally, Shaun began his career representing injured workers with a small plaintiff’s firm in Columbus and then represented the Bureau or Workers’ Compensation, the Ohio Industrial Commission, and Ohio’s public employers as a senior assistant attorney general at the Ohio Attorney General’s Office.  In addition, Shaun worked for the Bureau of Workers Compensation as a staff attorney in the legal division. Finally, Shaun is a first lieutenant in the Ohio National Guard judge advocate general’s office representing Ohio’s 174th Air Defense Artillery Brigade.

Shaun lives and works in Columbus with his wife and daughter and is a devoted, father, husband, lawyer, and guardsman. Shaun is passionate about the representation of injured workers and their families and firmly believes there is no greater calling for a lawyer than the act of trying a case with your client beside you.